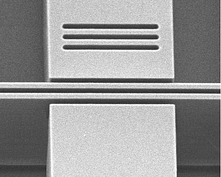 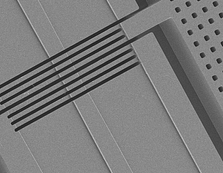 "The heat created by so many transistors stuffed onto a tiny sliver of silicon has pushed the thermal conductivity of copper interconnects to their limit." - Adam Penenberg, Slate Magazine.

Electronics-based devices have become smaller, faster, and more efficient. However miniaturization has reached its limit of heat dissipation in the copper wiring and interconnects. Using photons instead of electrons and optical fibers instead of copper cabling solves this problem.

Until a few years ago, photonics technology meant replacing wires with fiber one for one, requiring additional expensive and bulky converters. But now integrating micro-photonics and electronic components at the chip level enables a single fiber (that is coupled to the chip) to transport all the information.

According to marketsandmarkets.com "When compared with conventional electronics, silicon photonics provides 90% of its efficiency with one-third the power consumption at one-tenth of the cost."

"Silicon photonics is the only technology likely to be capable of removing bandwidth bottlenecks, thereby extending system performance beyond the end of Moore's law." - A.F.J. Levi, University of Southern California

Optical MEMS or MOEMS (Micro-Opto-Electro-Mechanical Systems) technology eliminates all the transformation restrictions that optical electronics technology delivers, leading to faster transmission speeds and more bandwidth. We use Silicon optical waveguides to integrate MEMS components with Silicon micro-optical elements. This allows using multiple sensors on the same chip. Integrating different optical components on a unique substrate, will contribute reducing the amount of external fiber optic interconnections, consequently decreasing the overall system mass and size, and  contributing the optimization of the system reliability as well as its cost efficiency.